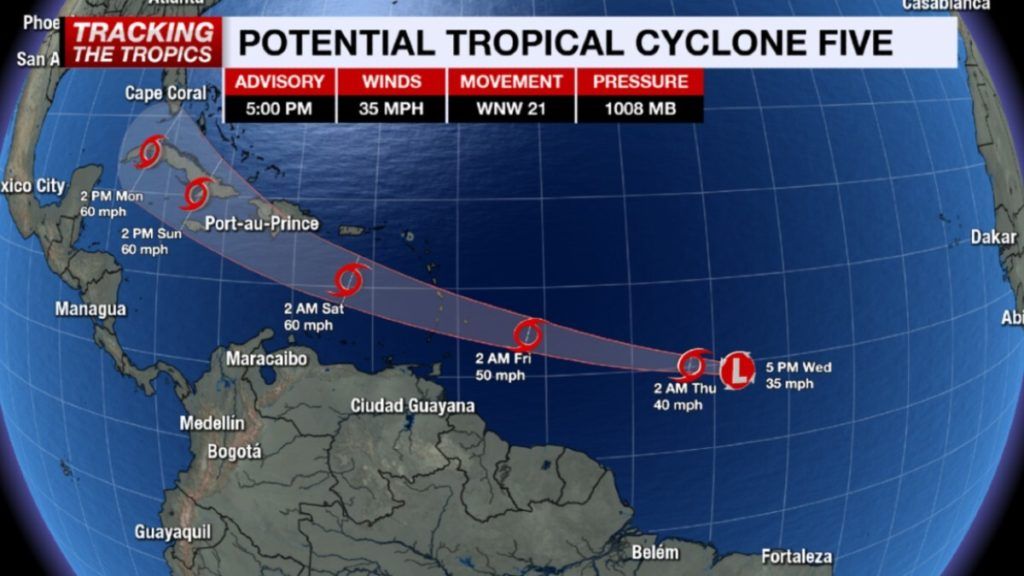 Areas of South Florida just south of Collier County are inside the long-range forecast cone of Potential Tropical Cyclone 5.

The initial advisory was released at 5 p.m. this evening and shows the system becoming a tropical storm later tonight, and then moving west-northwestward over the Caribbean Sea this weekend. As of now, the extended range of the forecast cone does include parts of Florida, just south of the Collier County line.

It’s important to note that forecast cones do not depict the only areas that see impacts from tropical systems. The cones express where based on the latest data, the center of the tropical system would be.

Impacts always range far away from the center of circulation, which is why Southwest Florida will need to continue to watch this system closely.  Based on the current thinking the system will be moving closest to Florida late this weekend and early next week, with the current data showing Monday being a day to watch especially closely.

The naming designation of Potential Tropical Cyclone Five (PTC5) simply means at this moment the system is not yet organized enough to be a depression or storm, but is expected to impact land, in this case islands between the Atlantic and Caribbean, as at least a depression in the next two days. The designation allows advisories, watches and warnings to be issued for impacted areas ahead of the storm.

One of the biggest uncertainties that lies ahead is how organized the storm could become, and there are multiple variables that could make the system weaker or stronger.

First, the system has a large plume of Saharan dust (dry air) just north of its circulation that could limit development.

Second, there’s also a band of strong winds aloft (wind shear) that could make it more challenging to organize.

Third, land interaction could become an issue for the storm this weekend as it nears mountainous areas of Hispaniola and Cuba.

At the same time, if the system is able to fend off some of these elements, water temperatures across the Caribbean are plenty warm to support tropical development, which is why this is an area that needs to be monitored closely.

It’s way too early to know exact impacts for the U.S. mainland, but this system should be watched closely throughout the holiday weekend.

Count on the NBC2 First Alert Hurricane Team to keep you updated, we’ll have updates and advisories during each newscast throughout the weekend and right through next week as we watch this system come together.