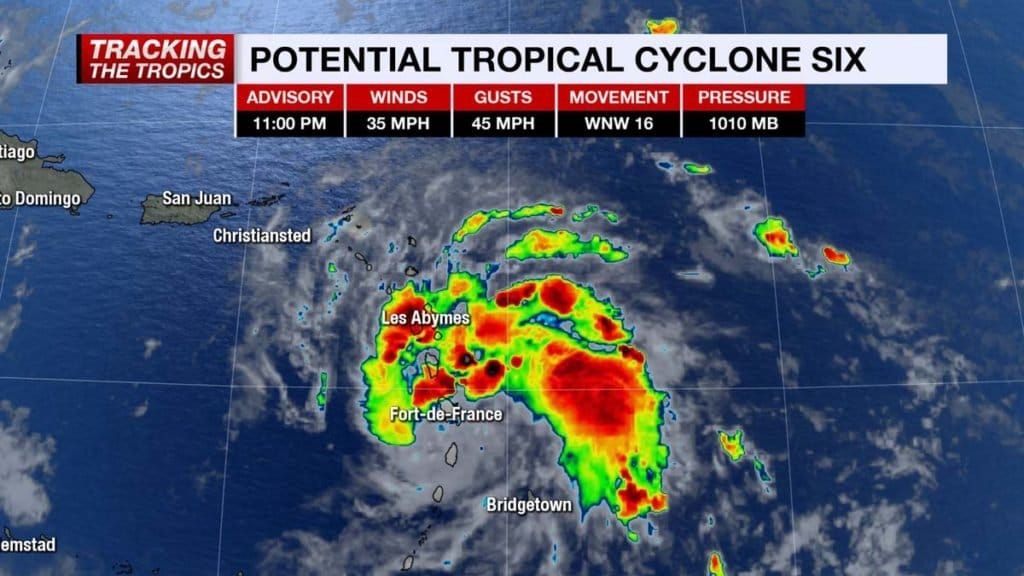 As of the 11 p.m. Monday advisory from the National Hurricane Center the system is producing maximum sustained winds of 35 mph as it swirls 40 miles east-southeast of Dominica.

The PTC (potential tropical cyclone) term gives land areas a heads up that a system is organizing nearby and allows the issuance of necessary tropical storm watches or warnings with suitable lead time.

The 11 p.m. advisory is a full advisory update and includes a revised forecast cone from the National Hurricane Center. With the latest data, you can see how Potential Tropical Cyclone 6 is expected to track west-northwest between 10 and 15 mph over the next few days and strengthen into a tropical storm as early as Tuesday morning.

All of Southwest Florida is inside the cone of concern for this system. Forecast cones depict where the center of circulation has the best chance of being at the given forecast time.

It’s important to highlight the size of the cone late in the forecast period when the system is over Florida. The wider the cone, the greater the amount of uncertainty.

This is why we in South Florida must watch the evolution of this storm in the days to come and be prepared for tropical storm-force weather conditions by the weekend given the latest data.

Forecast model guidance is in good agreement regarding the track of the storm over the next few days. However, significant uncertainty remains regarding the intensity that this system could reach by the time it gets close to Southwest Florida sometime after Friday evening based on the latest guidance.

Regardless of how strong the system develops, it should at the least boost rain opportunities in Florida starting by late Friday and continuing into the weekend.

The next full advisory update on Potential Tropical Cyclone 6 is due out at 5 a.m. Tuesday.  This full advisory will include a revised forecast cone from the National Hurricane Center. We’ll have the latest for you on NBC2 News Today.

Are you prepared for hurricane season?  The best time to get ready is now when things are quiet!  If you’re not sure where to get started check out the NBC2 First Alert Hurricane Guide online here.

The post SWFL in the cone of concern as Potential Tropical Cyclone 6 forms near the Leeward Islands appeared first on NBC2 News.